Uranium mining can be seen as digging up Pandora’s Box and then opening it permanently, so that the horrors inside can affect anyone who is nearby with all kinds of suffering.
Only 1% of the uranium ore consists of uranium, which means the dug up rocks must be crushed into a fine powder to get at this minute amount of uranium bound up safely in the rocks, deep underground. (All Indian cultures have traditions and beliefs that say these ‘evil’ rock formations should not be touched, handled or mined.)
Once the uranium is dug up and taken out of the ore, the toxic leftovers are piled up in huge piles or left in huge open pit mines, which contain many other radioactive elements, all of which are harmful to humans. 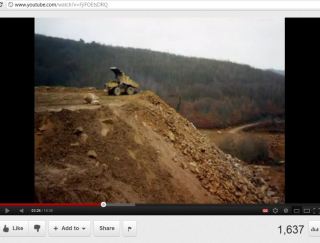 (picture from video below)
The tailing piles are actually MORE radioactive than the uranium that is taken out of the rocks. The uranium that is refined using large amounts of electricity and polluting chemicals is then used for nuclear power or to make nuclear bombs. 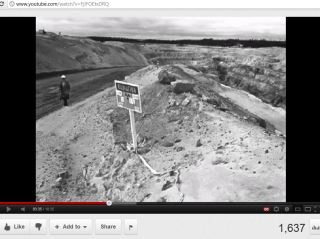 (picture from video below)
The leftovers are made into depleted uranium munitions, bombs and shells, which pollute the planet for 10 BILLION years… For more information on this toxic garbage that is leftover from this supposedly ‘clean and green’ industry, click on the following link.
Depleted Uranium Effects InThe Human Body, via A Green Road Blog  http://agreenroad.blogspot.com/2012/03/depleted-uranium-effects-in-human-body.html
The uranium mining tailing piles contain Polonium, which is about 2 billion times more toxic than cyanide. But the toxic and/or cancer causing effects of low dose radiation take years (10-20) to show up. Short term studies offered up by the industry show ‘no harm’, much like studies of cigarette smoking show no effect short term. But these cancers show up in long term studies.

“Radioactive substances released into the air from the mining of uranium will include: U-238, Th-232 & Rn-222.

The Radioactive substances released into the air from the grinding and milling of Uranium includes: U-234, U-235, U-238, Ra-226, Th-230, Th-234, Pb-210, Po-210, Bi-210 & Rn-222.” http://www.countercurrents.org/hamer160511.htm
Many times, uranium mines were opened in American Indian tribal areas where dangers were not known, safety measures were not taken, and unemployment was very high (50%).
The combination of these factors allowed private companies to come in and make huge profits, while paying only low wages with no benefits to Indian miners. Indians were left with the negative health effects and abandoned mines as well as toxic, radioactive tailing piles, plus numerous spills and accidents.
The US government established a compensation act in 1990 to award uranium miners $100,000 each, because the evidence proved that they were harmed, from just low level radiation exposure of uranium ore.
The same relationship is true of low dose exposure to uranium, plutonium and radon, or cesium from nuclear power plants. It seems somewhat idiotic for nuclear apologists to keep claiming that low level radiation does no harm, when the EPA has tightly regulated radon emissions in homes, and the US government has a uranium miner compensation fund.
Cigarettes contain small amounts of radioactive Polonium, which is about 2 billion times more toxic than cyanide; so is it any wonder that tobacco caused lung cancer rates are so high?
The tobacco industry also tried to deny all harm caused by tobacco. Do you remember all of the top tobacco company executives testifying before Congress under oath? They all swore on the Bible that tobacco did NOT and could not cause cancer, ever.
Bottom line, we keep getting the same old story, but in a different industry. For more information about low dose radiation studies and effects, click on the following links;
Lowdose radiation causing changes in children http://agreenroad.blogspot.com/2012/03/radiation-causing-unusual-changes-whats.html
Lowdose radiation dangers, lessons from Chernobyl
http://agreenroad.blogspot.com/2012/03/low-dose-chernobyl-and-fukushima.html
Radiationdangers in food and water
http://agreenroad.blogspot.com/2012/03/radiation-contamination-standards-for.html

The dust from these uranium tailing piles also contains uranium and other toxic, radioactive substances, such as radium and radon gas, (both are known cancer causing agents) which for human purposes, lasts forever.


The radiation amount and toxicity from these substances actually increases over time, as the breakdown and decay products are generated from the original materials. 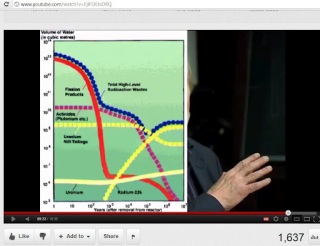 (picture from video below)
The toxic and radioactive rubble and dust/gravel piles are often used in building materials, such as cement, bricks, etc. This makes the buildings radioactive and toxic to live in, if for no other reason than from the radon gas releases. This toxic exposure and spreading of radioactive substances from uranium mining tailing piles is happening all around the world.
Watch the video below for more details on this subject….
The health effects of uranium mining causes illnesses in the workers that are impossible to manage or control. Lung cancer is common, as are other types of cancers.
In the video below, Dr. Helen Caldicott MD explains how cancer develops from a low level exposure to radioactive substances, such as living near nuclear power plants, uranium mining, uranium tailing piles, depleted uranium weapons lefover dust, radon gas, etc.
The nuclear industry says it is entirely clean and green, which is completely false and bogus information, according to medical experts such as Dr. Caldicott.
In the following short video, Dr. Caldicott also talks about the HUGE amounts of global warming fossil fuel used during uranium mining, uranium enrichment, power plants and waste disposal.
The heat and radioactive substances released from nuclear power plants once they are operating also causes global warming, because huge amounts of water are heated up to keep the plant cool, but all of this is covered up and hidden by the apologists hired by the nuclear industry, as well as the regulators and governments who are lobbied by this monopoly.
Watch this video for more details;
Then we can briefly talk about the accidents that these nuclear plants have.. In short, just about every accident is covered up, denied, spun, or minimized by the industry and utility involved. To find out more about this aspect of the uranium industry, click on the following links;
TMICoverup http://agreenroad.blogspot.com/2012/03/three-mile-island-coverups-exposed.html
Los AngelesNuclear Plant Meltdown; Completely Covered Up http://agreenroad.blogspot.com/2012/03/los-angeles-nuclear-plant-meltdown.html
Whatreally happened at Fukushima?
http://agreenroad.blogspot.com/2012/02/what-really-happened-at-fukushima.html
Is Fukushima really in cold shutdown?
http://agreenroad.blogspot.com/2012/03/fukushima-is-it-really-in-cold-shutdown.html
Fukushima Tsunami Explosion Coverup?
http://agreenroad.blogspot.com/2012/03/fukushima-tsunami-explosion-coverup.html
The following 3 short videos illustrates how there is a battle between a local community that typically does NOT want uranium mining to happen anywhere around it, and the national government which approves projects no matter what the local community wants. Typically, these state or national ‘approval’ bodies are corrupted and taken over by huge corporations globally.
These state or national agencies/regulatory bodies then force local communities into things that they do not want, such as uranium mines, nuclear waste material storage or recycling facilities, nuclear plants, etc.
In a few cases, the local community wins this battle, but more often than not, the community loses, because it does not have the numbers, influence, money or political power to keep huge corporations and all of their money plus the influence it brings in out.
The money that these huge corporations have is often used as a wedge. The corporations use money given as ‘perks’ or grants to those in the community who are in favor of it, while denying or fighting those who are opposed to it. For example, the Diablo Canyon Project got the National Sierra Club to approve/promote the building of their nuclear power plant in California, through financial and other ‘perks’ specific to key individuals or organizations.
This same type of dynamic or local bottoms up community values versus top down for profit battle plays out in other ways in local communities, such as Walmart coming in and putting many small business owners out of business, (while promising jobs).
Here is a short 3 part series showing how a large corporation runs roughshod over a small town in Europe, where uranium was discovered close by.
Part I
Part II
Part III
Related Links