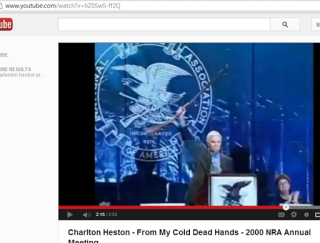 Gun owning men generally express but ONE feeling when it comes to discussing guns and gun rights; ANGER and/or rage.  Being angry when discussing guns and ‘rights’ of gun owners is considered ‘normal’. But if a woman gets angry due to the deaths of entire classrooms full of children from insane pro gun laws, that is not ok, and she is labeled; illogical, kooky, and hysterical. In other words, her opinion does not matter. Her opinion should not count.
What does the phrase; “From my cold dead hands” mean? From the context, could he be threatening anyone who passes any law against guns with being shot, by him personally, or by one of the gun toting NRA crowd?
Certainly, gun owners and gun rights advocates are the only people who shoot and kill peace loving, violence prevention advocates, throughout all of history. Kennedy, Gandhi, Martin Luther King Jr, and thousands more are testimony to this basic fact that those with guns kill peace and violence prevention leaders. Yet, when this is brought up, the illogical logic is used that guns don’t kill people, people do. Huh? So the gun lobby, gun manufacturers, and the NRA have no blood on their hands at all, ever, for any reason?
The gun industry even says it is OK to allow mentally ill people to own guns and shoot whoever they have a grudge or prejudice against. They are the ones pushing to keep laws the way they are. This means that any serial murderer or criminal can get a gun and go do another Sandy Hook Elementary school shooting. Now they can be famous too, thanks to the laws passed by the NRA and gun manufacturers, with a profit motive in mind.

How To Get A Gun If You Are An Insane Serial Murderer Or Psychopath; via A Green Road http://agreenroad.blogspot.com/2013/01/how-to-get-gun-if-you-are-serial.html

Freedom has many meanings to many people. To the native and Aborigine majorities worldwide who are abused by gun toting police and a few rich white minority, guns have the opposite meaning that the NRA propogandizes, when it comes to ‘freedom’.
To the Aborigines who for many thousands of years lived on many continents, guns were and still are seen as something that oppresses them and ‘takes them out’. Guns and their white owners commit genocide against native peoples globally. Guns kills anyone who opposes occupation of their native lands. Guns keep freedom and equal rights away from native or Aborigine majorities, and in the hands of a minority of usually white, male gun owners. Historically, guns were and still are used to take away property and rights from native land owners, such as the American Indians here in the good ol USA.
If a black male had said “from my cold dead hands”, in the year 1968 or even in 2000 at a convention of gun toting black guys yelling and ranting about ‘freedom’, they would be arrested right on the spot as terrorists and thrown into jail for a very long time, as the Black Panther Party members and leaders were.

Guns Do Not Stop Dictators, Informed People Voting Peacefully Do! via A Green Road
http://agreenroad.blogspot.com/2013/02/guns-do-not-stop-dictators-informed.html

Guns And Religion Historically Used To Commit Genocide And Enforce Apartheid; via A Green Road
http://agreenroad.blogspot.com/2013/03/guns-and-religions-historically-used-to.html

Thanks to the NRA, anyone with money can buy and own any kind of military killing machines or weapons that they want, capable of murdering and mowing down whole classrooms of innocent children, with absolutely NO RESTRICTIONS, no registration, no insurance, no classes, no education, no yearly fees, no limits on number of bullets, any types of bullets (including cop killers). This happens ONLY IN THE USA. This is not possible in any other civilized country worldwide.
In this fantasy world of ‘absolute gun freedom’, mostly a few white men want ABSOLUTE freedom and control in a fantasy world that is real only in their small little world,  with the horrific results for the larger community that follows on the heels of this mistaken belief system.
The freedom to do and say whatever a US citizen wants to, has limits. We not only have freedoms and rights, but realistic limits on those freedoms and rights when it comes to protecting the ‘commons’ rights of everyone. We cannot threaten our neighbor verbally with death, or with a gun, or we go to jail.
We cannot speed down the road, spraying bullets in all directions, or we go to jail. We cannot  shoot guns inside our own homes, or we go to jail. There are many common sense limits to ‘freedoms’, for the good of all people in a given community or nation.
Balancing rights and responsibilities is what laws are for. Gun owners seem to think that they are exempt and immune to any type of responsibility, accountability, or consequences for their belief system of absolute freedom around gun ownership.
Diane Feinstein became mayor of San Francisco after PERSONALLY experiencing the results of a pro gun believer who killed Harvey Milk, a gay representative of the people of that city. She KNOWS the politics of gun violence from first hand experience.
Guns are the FIRST weapons of choice for those who have a lot of hatred and prejudice, rather than the last choice. Harvey Milk was killed not by a kitchen knife, or a screwdriver, but with a gun. The seeds of hatred bloom and flourish with guns. Harvey Milk pointed at this FACT, and died to prove that this fact is true.
Combining people who have a lot of hatred or fear with guns, is what causes the problems. Reducing the number of military weapons in civilians hands makes sense, doesn’t it? Does it not make sense to take reasonable, common sense steps to reduce the body count from the current horrific 30,000 per year that the US experiences?
The US initiated foreign wars in Afghanistan and Iraq has cost 6,000 lives of US soldiers over ten years. Over 600 soldiers died per year overseas protecting our ‘freedom’. We try to reduce the number of these deaths, by all means possible. We spend BILLIONS to protect those troops from death and harm from guns and bombs.
Yet, somehow it is OK to sacrifice multiple times that many of our family members on the alter of gun ‘freedom’ here at home, in our own communities, without even talking about how to reduce THAT number? Why is it ok to talk about protecting soldiers, but it is NOT ok to talk about protecting children in our community?
Are we really ‘free’, when we live in fear in our own homes, and we are forced to lock doors, install security alarms and have security guards, because of easy access to military style guns and the culture of violence that they promote?

Lessons From The Tragic Shooting in Newtown, Conneticut; via A Green Road http://agreenroad.blogspot.com/2012/12/lessons-from-tragic-shooting-in-newtown.html

Gun Ownership Rates Declining For Many Reasons; via A Green Road
http://agreenroad.blogspot.com/2013/03/gun-ownership-rates-declining-for-many.html

America, You Must Not Look Away From Gun Violence; via A Green Road
http://agreenroad.blogspot.com/2013/03/america-you-must-not-look-away-from-gun.html

Bowling For Columbine;  Michael Moore; via A Green Road http://agreenroad.blogspot.com/2012/05/bowling-for-columbine-michael-moore.html

30% of all Guns Used In Crime Come From Gun Shows; via A Green Road
http://agreenroad.blogspot.com/2013/01/30-of-all-guns-used-in-crime-come-from.html

President Obama On The Rights Of Freedom Of Assembly, Happiness, Speech, Life, Liberty And Peace
http://agreenroad.blogspot.com/2013/01/president-obama-on-rights-of-freedom-of.html

Schools, Guns And Drugs; via A Green Road
http://agreenroad.blogspot.com/2013/01/schools-guns-drugs.html

What It Takes To Save Someone’s Life After Being Shot; via A Green Road
http://agreenroad.blogspot.com/2013/01/what-it-takes-to-save-someones-life.html

Julian Assange Speech at the United Nations; via A Green Road
http://agreenroad.blogspot.com/2012/09/julian-assange-speech-at-united-nations.html