Climate Denial Crock of the Week 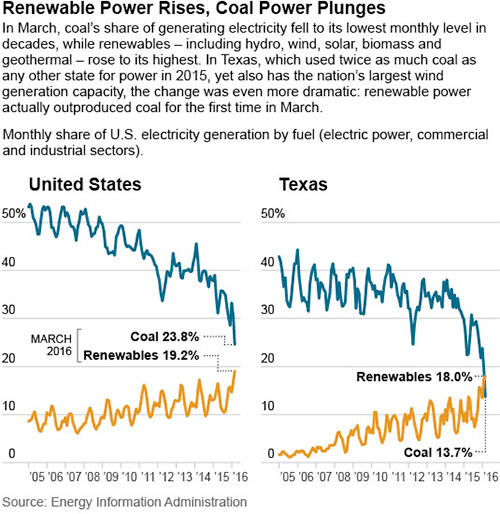 I  reported recently that in May, electric generation from solar power out performed coal in the UK, birthplace of the fossil fueled industrial revolution.

Same process happening in the US.

Renewable energy is gaining rapidly on coal in the US, even beating out coal in some states, according to new figures from the country’s Energy Information Administration.

Analysis conducted by the Institute for Energy Economics & Financial Analysis (IEEFA) highlights the recent numbers, which showed the amount of electricity generated by hydro, wind, biomass, and geothermal sources together reached 19.2% of all power generation in the United States during March — the highest percentage since hydropower ruled the country’s power grid decades ago. Non-hydro renewables exceeded 10% of net US generation for the first time as well, with natural gas accounting for 34.1% of generation, and nuclear covering 21.8%.

Meanwhile, coal’s share of the country’s power generation dropped to 23.8%…