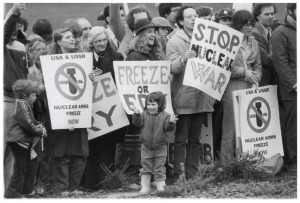 The Nuclear Freeze movement in the 1980s brought millions of protesters into US streets to demand an end to nuclear danger.

Curiously, although a widespread environmental movement has developed to save the planet from accelerating climate change, no counterpart has emerged to take on the rising danger of nuclear disaster.  Indeed, this danger―exemplified by the collapse of arms control and disarmament agreements, vast nuclear “modernization” programs by the United States and other nuclear powers, and reckless threats of nuclear war―has stirred remarkably little public protest within the United States and even less public debate during the recent US midterm elections.